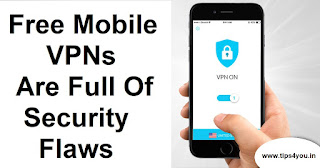 What happened?
Virtual private networks (VPNs) can help to protect your privacy, provided they are secure themselves. However, as many as nine in 10 free mobile VPN apps have raised privacy concerns according to Metric Labs, which examined 30 apps available on Google Play and the Apple App Store. Flaws included not having a privacy policy, tracking user activity and admitting to sharing data.


Alongside those shocking results, the lab found that half of the free VPN apps surveyed were based in China or owned by a Chinese company. That's especially worrying because the country has locked down VPNs, forcing providers to give authorities ready access.

How will it affect you?
Metric notes that VPNs are among the most frequently downloaded type of apps from both Apple's and Google's stores. There are plenty of good reasons to use a VPN, whether it's to avoid tracking, to make it look as if you're based in a different country (to access geographically restricted content) or to protect yourself from snoopers while using public  Wi-Fi.

However, a VPN provider can see everything you're up to if it chooses, so if your provider can't be trusted, you're not secure. That may not matter to you, depending on why you use a VPN - if you're not worried by targeted ads, for example, you may not care that a VPN has sold your preferences to a third party But if you want to be as secure as possible, it's worth paying for a VPN and ensuring you read the terms and conditions before you sign up.
What do we think?
Like your broadband provider, VPN services can see everything you do. However, your ISP isn't allowed to examine your traffic for advertising purposes or hoover up your data to sell to a foreign government, and there are laws about how much access authorities have. VPNs are less closely regulated, so do your homework and remember that you get what you pay for.