S S Chaurasiya Sunday, October 21, 2018
In the years following the American Civil War, French Sculptor Frederic-Auguste Bartholdi created the Statue of Liberty as a symbol of democracy and freedom. 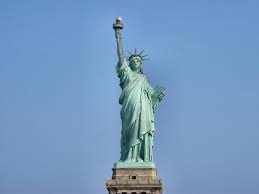 1⇨ The statues full name is statue of liberty enlightening the world.

4⇨ She holds the torch and tablet upon which is inscribed, the date of American declaration of independence (July 4, 1776)

6⇨ Although you cannot see lady Liberty,s feet clearly she is in fact standing among a broken shackle and chains, with her right foot raised, depicting her moving forward away from operation and slavery.

7⇨  Laboulaye proposed that a great momentum should be given as a gift from France to the United State as a celebration of both the union's victory in American resolution,and the abolition of slavery.

9⇨ Gustave Eiffel the man who desined Eifel Tower was also behind the design for Liberty's 'spine"; fore iron columns supporting a metal Framework that holds A copper screen.